Local hiking guide for your holidays in Italy. Discover nature and culture while trekking.

THE LEGEND OF BASILISK

The imagination of inhabitants of Alpine areas has generated various mythical animals. The difficult access to wild areas, the isolation of populations and the fear of a largely unknown nature has thus given rise to many fantasy creatures that are added to devils, masks, gnomes, etc. Among these animals, one of the most mysterious is the basilisk.

Little known outside the Alpine areas, it has experienced an increase in fame and popularity after being included in the Harry Potter saga.

From time immemorial, throughout Europe but especially in the mountainous regions, there has been a story of a reptile with hypnotic properties, extremely dangerous. In the Alps, the area where the legend of the basilisk has been most widespread is undoubtedly the Val Vigezzo, North Piedmont, Italy. The myth of the basilisk in this valley is so strong and widespread that the Municipality of Malesco wanted to make it its symbol and a few years ago even dedicated a fountain monument in its main square. The fountain has the shape of a quite common wildflower called Tormentilla, Potentilla or Tormentilla erecta, a 4-petaled yellow rosacea, quite common in Malesco pastures. This plant has been known for its healing properties since time immemorial. At the center of the fountain there is a huge boulder of "soapstone", Steatite, an opaque green rock composed of Calcium, Magnesite and a small part of Chlorite. The Basilisk is positioned above the green boulder.

The myth of the basilisk has very ancient origins: the first to leave us a written record was Pliny the Elder in his “Naturalis Historia”. According to Pliny, the basilisk would be a small snake, less than twenty centimeters long, with a spot like a crown on its head. Unlike snakes, it does not crawl, but advances with its body half erected. Despite its size it is the deadliest creature ever; it is very poisonous, capable of killing with just a look or breath. His breath withers fruit, his spit burns and corrodes, his gaze splits stones. The basilisk lives in the desert he created himself, because it can dry the shrubs as well as with contact, with just the look. A knight who struck the basilisk was killed along with the horse by the poison that infiltrated through the spear!

According to Pliny, the only way to kill the basilisk is to throw a weasel into its den, the smell of her kills it, but she too dies. According to a medieval belief, he can only be defeated with a mirror: his own gaze reflected in the mirror would kill him. Some images and descriptions of medieval origin represent the basilisk as a cross between a rooster and a snake.

Even today in the Ossola valleys it is easy to find someone who swears to have met or at least glimpsed this mythical animal. The popular names given to the basilisk are various: “Sarpent de la cestra”, “Sarpent dai ugiài”, “Sarpent Gatt”, etc. A parish priest of Domodossola, passionate hiker and expert of the surrounding mountains, tells of having seen an animal difficult to identify one day in the thick vegetation. He describes it as being about 60cm long, with the shape of a bottle and the ability to roll quickly off the slopes. Amazed by the particularity of the sighting, he considered it appropriate to notify a veterinarian from Domodossola, a long-time student of the local reptiles. The doctor, during his studies in the specific field, confirms the existence of this legend for some time. He has collected and continues to receive strange reports which, according to him, are for the most part the result of tourists and local inhabitants’ suggestion. A possible explanation can be based on the ancient geological nature of these valleys: as is well known, the Ossola mountains are rich in fossil finds dating back to the prehistoric era; it is not difficult, therefore, to find rocks containing fossil fish and shells. Hence the hypothesis does not exclude the possibility that some prehistoric reptile could have survived, although evolving over the centuries into an animal that has never been classified and is in danger of extinction (if not recently extinct). This authoritative hypothesis contributes to making this interesting and curious legend even more alive, destined to last over time. The fountain with the basilisk monument, made by the Milanese artist Luca Di Francesco, is clearly inspired by this real animal rather than by myth. If you ever happen to visit Malesco go visit this fountain, but please don't look the Basilisk in the eye! 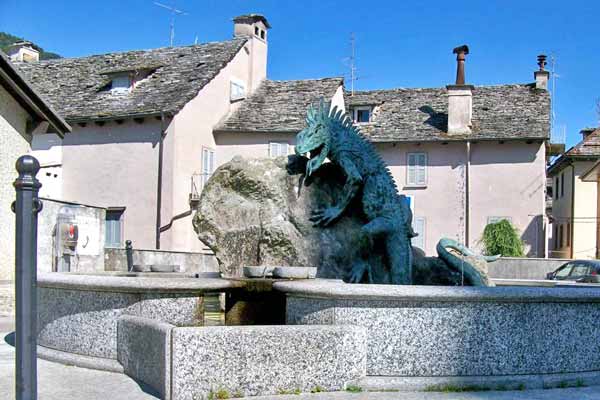 LATEST FROM OUR BLOG